Recently, while reading a National Geographic History article titled, “Portraits from the Past: The Faces of Al Fayyum,” I came across a fascinating picture (1).  The article describes funerary “portraits” used in the burial of mummies at Al Fayyum, Egypt “from the first century B.C. through to the fourth century A.D.”  These masks were employed during a time when “Egyptian, Greek, and Roman styles and customs began to intertwine…”  One of the images depicted in the article is a work called the “Tondo of the Two Brothers,” a copy of which I found posted on Pinterest: 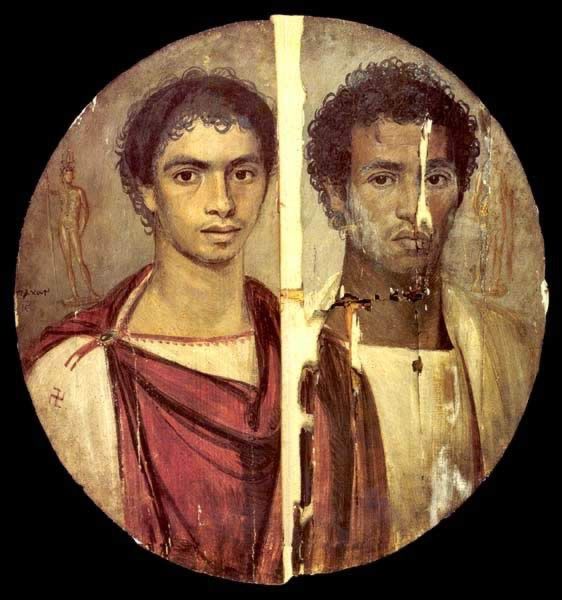 Do you notice something about the upper right arm of the left-hand figure?  He bears a small red swastika.  Seeing this reminded me about my curiosity over this symbol, its origins, and its meaning.  If you grew up as I did – a child of the latter 20th century in Western society – then the swastika has one overriding connotation: the evils of Nazi Germany.  But, perhaps you’ve also encountered the swastika in a context very different than anything apparently related to Nazi Germany.  Consider for instance this picture, taken at a Buddhist temple on the island of Guam in 2012:

Similarly, the swastika shows up on another Buddhist statue, this time located at a museum in Beijing in 2011, and again as a candle arrangement at a Beijing location during the same year:

Being otherwise uninformed as to the history and origins of the swastika, it became clear to me over the years that the meaning of this symbol runs much deeper than mid-20th century Europe.  This week I finally sat down to do a bit of cursory research.  Maybe you’re way ahead of me in this regard, but for those that aren’t, here’s what I found:

The swastika is an old, old symbol, its origins obscured in the days of unwritten history.  It is especially tied to Asian religious systems, including Hinduism and Buddhism, but not exclusively so (Note: The word “swastika” derives from a Sanskrit term.  Sanskrit is an ancient Indian language) (2).  In fact, one of the oldest known swastika patterns appears on an ancient ivory figurine found in Ukraine and housed today at the National Museum of Ukraine (see this BBC article titled, “How the world loved the swastika – until Hitler stole it”).

As to its meaning, the limited and unscholarly sources I reviewed agree that the swastika historically symbolized blessing or good fortune.  From a more scholarly viewpoint, Thomas Wilson states:  “What seems to have been at all times an attribute of the Swastika is its character as a charm or amulet, as a sign of benediction, blessing, long life, good fortune, good luck.  This character has continued into modern times, and while the Swastika is recognized as holy and sacred by at least one Buddhistic religious sect, it is still used by the common people of India, China, and Japan as a sign of long life, good wishes, and good fortune).”  The Jewish Virtual Library notes, “Throughout its history the swastika represented life, sun, power, strength and good luck.” Again, in Wilson we read this: “…it would seem that, except among the Buddhists and early Christians, and the more or less sacred ceremonies of the North American Indians, all pretense of the holy or sacred character of the swastika should be given up, and it should (still with these exceptions) be considered as a charm, amulet, token of good luck or good fortune, or as an ornament for decoration.”  In short, until the middle of the 20th century most people viewed the swastika as a positive sign – sometimes of religious significance –  with almost universal application.

In summary then, before I offer some further thoughts, the swastika is a widespread ancient symbol, sometimes religious, and seemingly as old as human history.  Although varied in terms of specific meaning, the swastika historically pointed to life, vitality, good fortune, and perhaps the sun itself.

Now, let me see if I can make two points that seem to me quite pressing with respect to the swastika.  First, may I suggest that this symbol indicates a common origin for human beings?  How else does one design acquire such widespread, transcultural significance with an apparently positive meaning that holds stable across time?  It would seem that the swastika arose early in human history.  Perhaps this symbol traveled from Babel outward in the days when God scattered his human creation by confusing their language (see Genesis 11:1-9).

Second, despite positive connotations, it seems that almost from its inception darkness has lurked just below the surface of the swastika’s lines.  Think about it…Here we have a widespread and compelling symbol representing “good” and the “good life” usually apart from reference to the one true God.  This is especially true if the swastika did in fact originate with early animistic Hinduism before being subsumed into Buddhism.  The swastika has, apparently, represented life, vitality, good fortune, and blessing in a way not dependent on God.  Isn’t that the great temptation in the Garden as the serpent says to Eve: “You will not surely die.  For God knows that when you eat of it [the fruit] your eyes will be opened, and you will be like God, knowing good and evil” (Genesis 3:4-5)?  Isn’t the desire to prosper apart from God simply a manifestation of the pride that undergirds humanity’s rebellion (sin) against our Creator?  And doesn’t human sin sit right near the core of evil, perhaps one degree removed from the evil that is Satan himself?  Do you see my point?  Do you see how even the positive connotations of the swastika form only a veneer over that which is fundamentally corrupt and dark?

(Note: By way of an interesting sidebar, if it is legitimate to see a connection between the swastika and the sun, then the symbol reminds us of this warning from Deuteronomy 4:19: “And beware lest you raise your eyes to heaven, and when you see the sun and the moon and the stars, all the host of heaven, you be drawn away and bow down to them and serve them, things that the Lord your God has allotted to all the peoples under the whole heaven.”)

Now, if I am correct to associate the swastika with a desire for good apart from God, if I am correct to see evil just below its surface, then it’s really no surprise that this symbol presided over perhaps the greatest physical manifestation of evil in the 20th century – namely Hitler, the Nazis, and their Holocaust.  Hitler did not turn the symbolism of the swastika evil, he merely completed its logic.  The Nazis drew out and accentuated what was already incipient, or latent, or implicit in the history of the form itself.  A symbol innocuously impregnated with the meaning of “good” apart from God became a harbinger of terror when its surface veneer cracked.

I don’t want to suggest here that all manifestations of the swastika in history are irretrievably evil.  Indeed, by definition anything that points to that which is actually “good” necessarily points to God, though the pointer may not know it.  This is why, perhaps, even early Christians were able to make use of the swastika motif.  While the symbol itself is likely irredeemable in Western culture post Nazi Germany, the swastika motif as a matter of geometric design may yet find use in a God-honoring fashion – perhaps when Jesus returns and sets all things right.

Instead of bashing the swastika as manifestly evil, my real point is to peek just underneath the surface-level meaning of the design.  It is to notice the incipient evil that lies lurking when “good” is disconnected from “God.”  This basic point leads me to two conclusions (maybe points of application) that need brief mention before I close this post:

Conclusion #1: Anytime I look for “good” (blessing, good fortune, life, vitality) apart from God, anytime I desire blessing in life apart from the person and work of Jesus Christ, I stand on a foundation that is fundamentally unstable and corrupted.  No wonder that Scripture describes all my own attempts at righteousness as “filthy rags” (or a “polluted garment”; see Isaiah 64:6)!  Yes, I am meant to desire the “good” life, especially the “good” that is life itself, vitality, and blessing.  But none of this will make any ultimate sense separated from God himself; God revealed in the person and work of Jesus Christ; God as the definition and arbiter of “good.”  Indeed, the pursuit of “good” apart from God will quickly lead down dark, twisted, and dangerous pathways.  If my pursuit does not lead me to personally manifest Holocaust-like evil, it won’t be because I’m not on the road the same road traveled by Hitler and his henchmen.

Conclusion #2: For believers in Jesus Christ, the story of the swastika presents a challenge.  Where in life do we unconsciously, or as a matter of unthinking sinful habit, give ourselves to something that is “good” with no reference to God, even in the symbols we esteem, honor, and make use of?  In the area of California where I live, there is a highly expensive resort-type location that employs a solitary Cypress tree as its logo.  The logo implicitly stands for wealth, leisure, refinement, golf, fine living, and luxury.  Interestingly, this meaning isn’t too far removed from the historic connotations of the swastika.  Seems innocuous right?  What’s wrong with a Christian appreciating such things and enjoying some luxury in life?  Maybe nothing…or maybe everything.  The question is, as a professed disciple of the Christ, how does the worship of a poor, beaten, bloody, and crucified Jesus undergird my association with the Cypress and my identification with the logo?  Am I enjoying that which seems “good” in worship of him who is GOOD, or is the Cypress truly alone in my mind and behavior, with no reference to God?  If the latter case is true, then the Cypress might as well be a swastika.

(1) Eva Subias Pascual, “Portraits from the Past: The Faces of Al Fayyum,” National Geographic History, July/August 2018.

(2) Thomas Wilson, The Swastika: The Earliest Known Symbol, and its Migrations with Observations on the Migration of Certain Industries in Prehistoric Times (Washington: Government Printing Office, 1896), available at http://www.gutenberg.org/files/40812/40812-h/40812-h.htm#Page_952;